Aidan Forth author of "Barbed-Wire Imperialism: Britain’s Empire of Camps, 1876-1902." The subject of JCHA/RSHC 31 no.2 roundtable.

AIDAN FORTH is an Associate Professor of History at MacEwan University.  He is now completing a global and longue-durée history of the concentration camp for the University of Toronto Press (forthcoming in 2023) and conducting research for a new monograph titled The Passage East: Connection and Mobility in a Globalizing World. His first book, Barbed-Wire Imperialism: Britain’s Empire of Camps, 1876-1902, won the Wallace K. Ferguson Prize from the Canadian Historical Association and the Stansky Book Prize from the North American Conference on British Studies. You can read his response to the JCHA roundtable in JCHA 31 no 2.

I was always interested in history. It is an ecumenical discipline that permits a broad investigation of the human experience. At the same time, history is fundamental to understanding the global present and its many discontents. This is especially true for the British imperial past. At its height, Britain governed over a quarter of the world’s population. The wars it fought, the borders it drew, the economic systems it established, and the political ideas it spread have profoundly impacted the world in which we live, both for better and for worse. The twentieth (and now the twenty-first) centuries have been marred by violence, racism, and the mass incarceration of suspect and unwanted populations. My work thus far has investigated the roots of these injustices and found many of them in the British imperial world of the late nineteenth century.

Global histories aim to provide a big-picture, bird’s-eye perspective. The payoff is that the historian can uncover connections between events normally considered in isolation and thereby understand dynamic interactions between different parts of the world. The challenge, of course, is that it is impossible to be truly comprehensive. The historian will inevitably neglect something important or else convey only a superficial understanding of certain local histories. My book Barbed-Wire Imperialism didn’t aim for (and certainly didn’t achieve!) full global coverage, but it did place different parts of the world—South Asia, southern Africa, and Britain itself—within a common interpretive framework. In doing so, I tried to break down historiographical silos that tend to divide rather than unify historical fields, which are still often defined by geography.

Though the global (or “trans-imperial”) scope may seem daunting, I largely let the archives lead me. London, of course, was the hub of an imperial network, and its archives—at the Public Record Office and the British Library—bring together correspondence from multiple colonial realms.  My initial interest was the “concentration camps” of the South African (or Anglo-Boer) War (1899-1902), which also took me to archives in South Africa. Yet the more I read, the more evident it became that colonial practices from India—in particular, the concentration of distressed and marginalized populations in famine relief and plague quarantine camps in the 1890s—were important predecessors to the detention of civilian populations in South Africa. I thus spent several months in India, where I was able to access rich, granular records that were unavailable in Britain. In all these global travels, I was very fortunate to have the financial support of Stanford University (where I completed my PhD), as well as funding organizations like SSHRC, SSRC, and the Mellon Foundation. Research in global history can be expensive—a challenge that will only worsen as the humanities and public universities more generally face repeated budget cuts. 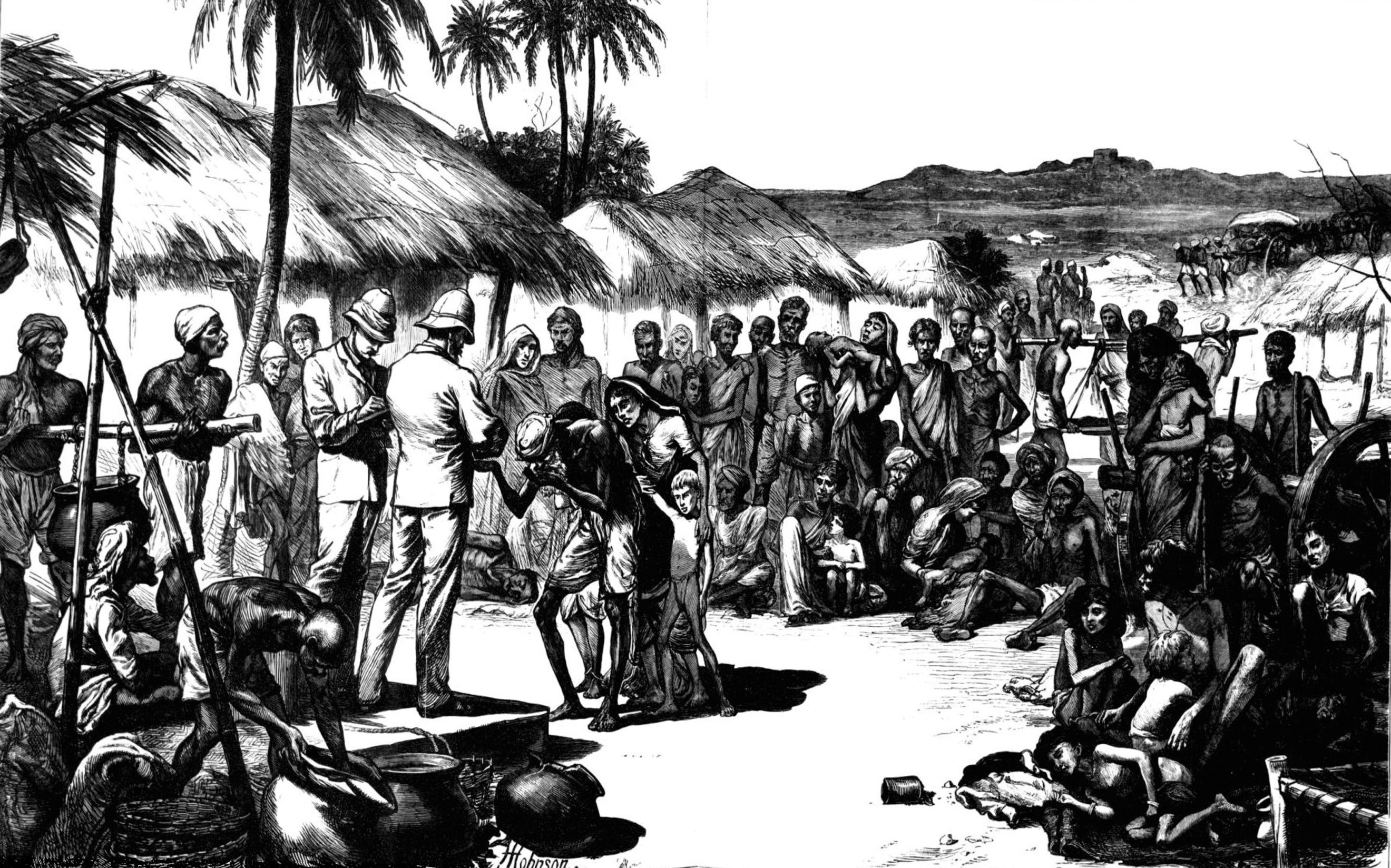 "Composed for metropolitan audiences, The Graphic’s idealized image of a Madras famine camp depicts British officials in calm and authoritative postures, while humble famine sufferers are prostrate and receptive to British benevolence—grateful applicants rather than arrested suspects."- Aidan Forth, Barbed-Wire Imperialism

The colonial realm, according to Franz Fanon, was “a world divided into compartments.” Camps demarcate space and divide populations. They are material manifestations of the larger colonial mantra to “divide and conquer.” Some of the first camps I examine in Barbed-Wire Imperialism are the plague segregation camps of colonial India and South Africa.  As we well know from COVID-19, viruses and bacteria do not discriminate according to class or skin colour.  But social policies do.  As bubonic plague—a much more serious albeit less contagious disease than Covid—spread across India, British authorities enacted draconian public health measures. Employing military counterinsurgency tactics, search parties invaded private homes and rounded up “suspects,” invariably the residents of impoverished native quarters, whom they detained in “plague segregation camps” surrounded by fences and wire. Yet while medical authorities recognized that Europeans were as prone to plague as natives, they officially and categorically exempted the white population from all plague measures. The legacies live on today. In Johannesburg, the plague camp was located at a former sewage dump in the suburb of Soweto, which formed the nucleus of the infamous native location that became an enduring symbol of apartheid.  In Cape Town, meanwhile, plague operations offered a pretext to burn the cosmopolitan neighbourhood District Six, once a thriving interracial community, but now an empty field, an eerie monument to the violence of colonial racism.

The racial legacies of wartime concentration camps in South Africa are more complex. Here, Britain interned white Europeans—Boer farmers who descended from Dutch settlers—alongside native Africans as a military counterinsurgency measure. In doing so, they demonstrated the discursive flexibility of race. The Boers, British authorities maintained, had a “strong infusion of the negro” and were the “lowest stock of European humanity.” Camp conditions for black Africans, however, were far worse than for their white counterparts. And yet, the Boer population mobilized memories of the camps to build the ideological foundations for apartheid in the twentieth century: a strong, authoritarian, white-supremacist state, Boer ideologues argued, was necessary to prevent white South Africans from ever being humiliated again as a subject colonial race. In the process, the history of concentration camps for black Africans was “whitewashed,” via the destruction of archives and the erection of white-nationalist monuments. Recovering the black camp experience was one of the book’s most significant challenges.

My current project Camps: Mass Confinement in the Modern World (forthcoming with the University of Toronto Press in 2023) is, indeed, a more global narrative of the camp, broadly conceived, from its early origins in prisons, workhouses, native reservations and slave plantations, through classic cases like Nazi Konzentrationslager, the Soviet gulag, and Chinese laogai, all the way up to migrant detention centres, Uyghur concentration camps, and the refugee enclosures that demarcate boundaries between the prosperous “west” and the Global South (a division inaugurated by the imperialists of the nineteenth century.)

The JCHA forum has been absolutely foundational in helping me think about the Canadian dimensions of my work, particularly now that I’ve returned to Canadian academe after working in Europe and the United States. In Barbed-Wire Imperialism, I spent a great deal of time researching the devastating famines of the 1870s, which killed millions of Indian peasants and induced many more into British-run “relief camps,” which distributed food in return for heavy labour and exacting discipline.  Until I returned to Edmonton (my hometown), however, I remained largely ignorant of the hunger that swept First Nations communities on the Canadian prairies in the 1870s (and which was related to the same global El Nino complex that caused drought in India). This famine, along with devastating diseases (smallpox rather than plague) offered the context in which the Canadian government removed Indigenous populations from key settlement corridors and concentrated them in reservations. My new book will attempt to incorporate these local experiences within a broader global narrative of population displacement and mass confinement.

That is a fraught question for an academic! As I note in the JCHA forum, James Daschuk’s Clearing the Plains has helped me connect colonial practices in India and Africa with those at home in Canada, while Michelle Alexander’s provocative The New Jim Crow has helped me understand why the United States incarcerates more of its population, per capita than Stalin’s Soviet Union. As I complete the final chapters of Camps: Mass Confinement in the Modern World, I have also been turning to Victorian novels and travel memoirs in preparation for yet another book project on the connections between globalization and transportation in the nineteenth century. Around the World in Eighty Days, which I recently finished, is not only light and enjoyable, but it supports, in some uncanny ways, my underlying hypothesis: the easier travel became, with comfortable cabins on luxurious steam-powered ocean liners, the fewer opportunities travellers had to meaningfully connect with the people and places they passed by. This is a premonition the novelist Joseph Conrad (one of my favourites) expresses, as explored by Maya Jasanoff’s biography The Dawn Watch, which is also excellent. As a parent of young children, I don’t get a lot of time to read “for fun” these days, but for relaxation, I always enjoy a good David Sedaris story, while V.S. Naipaul offers a fix for whenever I feel nostalgic for India.